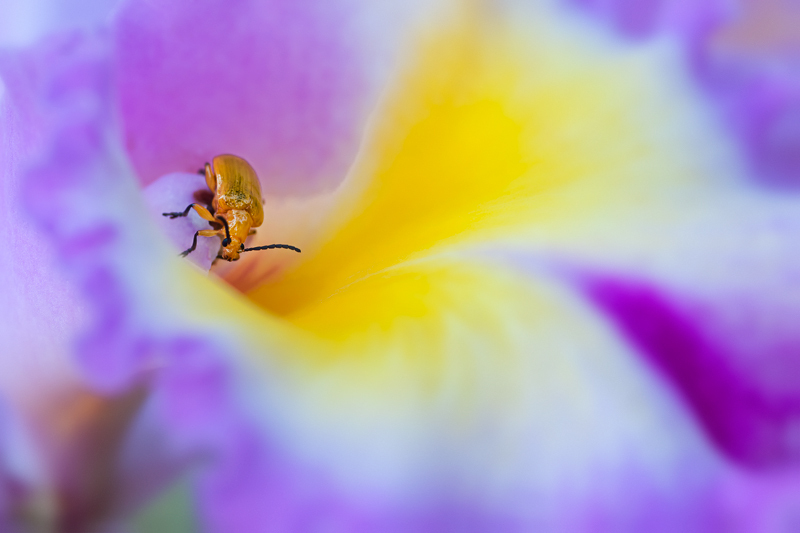 Orchid lema (Lema pectoralis) belongs to the Chrysomelid beetle or the orchid beetle. The orchid lema is a major beetle pest of orchids, particularly vanda and dendrobium. As an adult beetle, it starts to feed after one to two hours after emergence from the cocoon. It has golden yellow color except for the black claws.

It's a pretty pest. An excellent macro.

OT,
was het je schoonvader niet:-)
het was in Limburg:-)

Awesome shot that. Well done on that composition, superb colors.

Exquisite image - love the swirls of colour in this miniature world!

A marvelous capture with wonderful colouts and excellent clarity.

curieuzeneuzemosterdpot from somewhere between viewer and subject, Belgium

What a beautiful place he lives in !

beautiful macro! The colors are gorgeous.

What an abundance of colors, she must feel happy ;-)

Colors at its best ! Sunny and bright !

You are a genius at these colorful macros! Another wonderful capture!

Superb ! Love the harmony of these bright colors.

What wonderfully exciting little worlds you discover for us . .

Wonderful in his yellow and pink room!!

Even without the beetle this would be beautiful...it is like an egg yolk broken over a purple dream. So sumptuous.

Hi Monique - I'm back on AM3 after a 5 yr break so dropped in to say g'day! Glad to see you're still here. cheers Bron

This one makes me want to eat some ice-cream that very flavor of yours here !