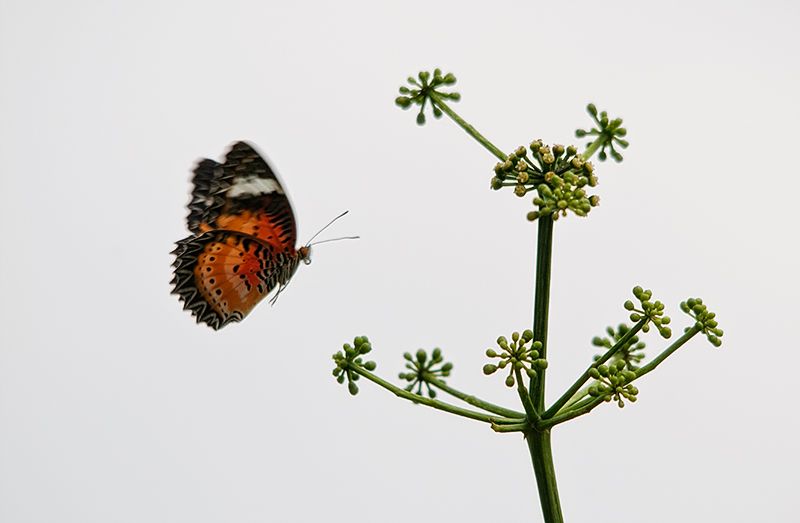 The Leopard Lacewing (Cethosia cyane) is a species of heliconiine butterfly found from India to southern China (southern Yunnan), and Indochina. Its range has expanded in the last few decades, and its arrival in the southern part of the Malay Peninsula, including Singapore, is relatively recent. The female is similar to the male in markings, but the tawny groundcolour replaced by pale greenish white, somewhat brownish on the upperside of fore wing,

The white background makes this a very special shot, and I love the way that you have captured the butterfly in flight towards this very graphically simple plant. All in all a really, really nice shot

Oh my word! This is amazing, Monique. Your timing was spot on. Wonderful DOF and framing.

Gorgeous feel & image ! As i wrote elsewhere ;) : The wings are so alive in their movement, not frozen at all -alive. And the plant is so sharp over that white background - very impressive & totally enjoyable, heart-opening image !

Thanks for sharing and the information on the species as well. There are so many species naturally or due to man-made factors are extensively moving over their known territories.

A bit blur, I so wish it was completely sharp. Good composition.

@Girish: Me too, it's a shame the head isn't sharper but there were still enough details ;) I was on the look out for birds and the 150-500mm isn't really suitable for insect shots.

What a great timing on this photo

How great this is, as if it has been taken in studio with a white background. Truly impressive, details are really enhanced and so awesome. Wow.

Such a strong feeling of 'the moment' in this . . lovely catch.

Wow, Monique, this is superb - one of the best butterfly photos I've ever seen! White background is great. *****

I love this! It's such a clean photo! Well done for the great shot!

Wonderful image against the white background, you can see the anticipation of the butterfly landing on the flower

marci from in, Morocco

did you take this photo?
an incredible shot, superb photo and explication

@Itziar: Who else would have taken it? It's my photoblog :)

A lovely action capture of this beauty. You never cease to amaze with these wonders.

that was an excellent shot, kudos!

a great and lovely shot !

You just keep on making stunning poetic shots, Monique. Getting even better! You get my 5* for this one. The female picture is also beautiful. (Hope to being able to catch up with you during April!)

Terrific capture! So good to be reminded of summer's beauty and light!

Perfect picture of buterfly that i would like to make! I'm so jalous ;)

with this white BG, it's gorgeous! more than excellent!

That is so stunning Monique! Finally catching up here:)